After the launch of their Polyworx™ product, the president of Howard Fertilizer & Chemical proclaimed this winning campaign to be the best the company has done since 1932.

Today Howard has a diverse portfolio of products for agriculture, turf and ornamental, pest control and retail/export markets. In 2016, Howard acquired their first proprietary product, Polyworx.

KidGlov was selected to help launch Polyworx, the newest technology in slow release polymer coated fertilizer, because of our reputation for creative branding that uses “outside-of-the-box” thinking.

The Golf Industry Show was picked as product launch headquarters for Polyworx. The ultimate spot to network with professionals and the media to discuss the latest and greatest in turf and facility care.

The strategy behind the Polyworx brand coattails on the classic story of “The Tortoise and the Hare.” An old fable with a new twist reinforced the advantages of this winning slow release fertilizer product.

As the yellow shelled, robotic turtle, branded with Polyworx mark strolled on the scene, attendees at the tradeshow took notice. This little guy (fondly named “Howie”) is one ingenious reptile.

Howie’s shell mimics the color of Polyworx prills and his space-age body represents the newest technology in polymer-coated fertilizer. Making competitors at the event green with envy.

Howie, sporting the Polyworx brand on his shell, was spotted all over the Golf Industry Show. From registration to the tradeshow floor, product brand messages were everywhere!

In addition to Mr. Howard proclaiming this the best campaign in the company’s history, Howard signed a deal with one of the largest lawn care companies in the country on the eve of the show. 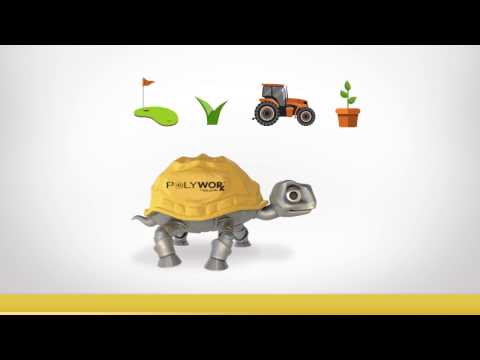